Shoreline protection around the Bay comes in many forms; from engineered levees, to natural berms and tidal marshes, to ad hoc protections not designed for flood protection, such as transportation infrastructure. Shoreline protection in all its forms is essential for the protection of communities and assets from coastal flooding. 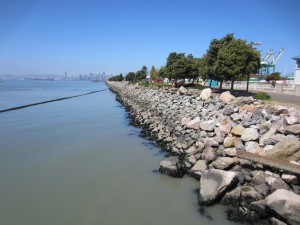 Engineered flood protection such as levees or floodwalls are designed to protect inland areas from a 100-year water level (an event that has a 1% chance of occurring in any given year). In some parts of the bay non-engineered berms can also provide a lower level of flood protection. Natural shoreline areas around the Bay include a range of shoreline types, from tidally-influenced marshes and managed ponds to cliffs and beaches. Natural areas often provide a first line of shoreline defense around the Bay. These systems provide an array of ecosystem service benefits, the loss of which will ultimately diminish the value of the Bay Area as a desirable place to live. Inland assets and communities are unlikely to have control over the flood protection that they rely on.

Structural shorelines are vulnerable to sea level rise and storm events which increase tidal currents, wave energy, runup and overtopping, among other effects. These effects can weaken shorelines and potentially reduce their efficacy as flood protection. Engineered flood protection is vulnerable to levee crest and backside erosion if overtopped, while engineered shoreline protection is vulnerable to mobilization of the armor layer and erosion of the foundation. Non-engineered berms are especially vulnerable to erosive wave and tidal action because they have not been designed to withstand these forces and are often not maintained on a regular basis. Transportation infrastructure serves as another form of ad-hoc flood protection—shoreline types which provide flood protection but have not been designed or maintained to do so. Functions other than flood protection often take priority with transportation infrastructure, and both its management and physical characteristics make it difficult to adapt to sea level rise over time. 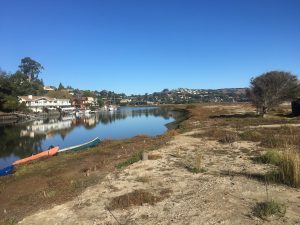 The vulnerability of any particular stretch of structural shoreline depends on its location, type, design and maintenance. Structures with space to be expanded or improved, that have dedicated funding and permit authorizations for maintenance and improvements and are already included in long-range capital improvement planning are more likely to be in sound structural condition and are therefore less vulnerable. Realignment of some structures to a new inland position may be necessary in some instances. A multi-agency approach can assess the feasibility, potential effectiveness, and potential impacts to surrounding areas of these types of projects. Planning, financing, and coordinating the ongoing maintenance or capital improvements of structural shorelines is complex, as they are often owned by one entity and maintained by another and are regulated by a number of different agencies.

Natural shorelines around the Bay include cliffs and bluffs, and beaches, tidal and muted marshes. Cliffs and bluffs are susceptible to large erosive events with increased wave energy, as their steeper slopes will cause wave energy to increase at faster rates than sea level rise itself. Marshes often serve as buffers which help reduce incoming wave heights, protecting shoreline structures from wind, waves, and tidal energy. Fully tidal marshes are either exposed to the open Bay or are protected from wave and tidal energy by offshore mudflats. At the other end of spectrum are muted tidal marshes and ponds, that are protected from the Bay by berms and levees and have water levels controlled by tide gates and other structures. The loss of these natural areas can increase the likelihood that the next level of shoreline protection is overtopped or fails, and can increase the cost of maintaining, repairing and upgrading these already expensive structural protection assets. In addition, many natural shorelines, including tidal and muted tidal marshes and ponds, have been restored and represent a significant financial investment. Many of these areas provide habitat to a number of state-listed or federally threatened and endangered species as well as migrating and wintering birds that rely on them for breeding, foraging, and high tide refuge. Additionally, they offer opportunities to view wildlife, provide recreational access to the shoreline, and offer scenic and aesthetic benefits. A loss of these natural areas would result in both the loss of their function as a buffer, and of the many additional benefits they provide. 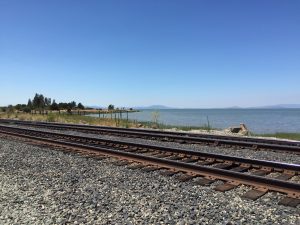 The consequences of damage or failure of shorelines depend on the assets and communities they protect. Disadvantaged and vulnerable communities will endure greater burdens should flood protection efficacy be reduced. In many locations around the Bay, shoreline failure will most likely result in the loss of critical facilities, services and infrastructure that local communities, the region, and in some cases the state and nation, rely upon. One of the most significant challenges with shoreline protection is the owners of inland assets do not own and are not responsible for the flood protection. In many cases, asset owners do not know that their properties are protected by structural shorelines. Even if they are aware, they do not know who owns the structures that are protecting their property.