The Adapting to Rising Tides Program completed an initial exploration of the funding needs, funding supply and resulting funding gap for sea level rise adaptation in the 9-county Bay Area. 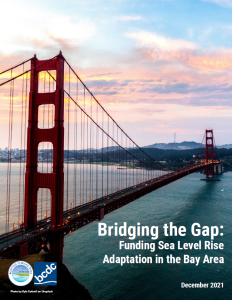 Rising sea levels (SLR) will have widespread impacts on the Bay Area, and adapting to this hazard will cost tens of billions of dollars over the next several decades. This paper is an initial exploration of forecasted estimated damages in the absence of adaptation, as well as the funding needs, funding supplies, and funding gaps that the region could face as it adapts to rising sea levels during this century. It is apparent that multiple funding sources – a diverse set of public funding mechanisms as well as private and philanthropic funding – will be required for the Bay Area to adequately address this problem. This exploration is based on what we know now. But, there is so much uncertainty surrounding the “how,” “when,” and “where” of SLR that this exploration needs to be viewed against the kaleidoscope of so many issues that are based on forecasts that, themselves, can be viewed as uncertain.

This white paper was completed in Fall 2021. The paper can be downloaded below.